Many people around the world consider Thai food as one of the best cuisines in the world due to its vibrancy, flavour and texture which gives people an explosive mouthfeel.  Much like Chinese Food where each region has adopted its own style of flavour. Thai food’s diversity is one of the reasons why tourists from all over the world, seeking to explore the land and it’s exotic bounty of dishes, from the Centre to the South, the North, the East and the West.

There are dishes that are synonymous with Thai food such as the Phad Thai or Green Curry but a truly ubiquitous dish of the Thais and seen all over Thailand (apart from Som Tum [ส้มตำ] AKA Papaya Salad) is the beloved Khanom Chin.

You may have seen this 3-part ensemble dish (noodles + curry + fresh condiments) at street cart vendors and at shop house stalls and even versions at Michelin-rated restaurants, but in their usual surroundings, they are typically displayed in large thin-steel pots loaded with soupy curries in various bright colours, with at least of fish balls floating on top.

These are called “Namyas” [น้ำยา], the variations are based on the regions to which they come from. The Namya is a type of curry that usually consists of groundfish, ground shrimp, ground crab or ground meat to thicken it.

Likely in a tray or basket covered by plastic film or damp cloth will be the “Khanom Chin” noodles itself. When most people hear the word “Khanom Chin” [ขนมจีน], they would assume this would be referring to the white, stringy noodle that is originally from China because Thai people spell and pronounce “Chin” [จีน] in Khanom Chin the same way they do with “Chin” [จีน] which means Chinese and China, which cause the misunderstanding.

The Thai people enjoy eating the noodles with their curry of choice with a lot of the free, fresh condiments and spices which are on offer at every stall. The condiment range usually consists of bean sprouts, chopped long bean, fermented cabbage and fresh herbs, but it’s entirely up to the diner what they choose to put in their Khanom Chin. It’s a very personal dish and one plate usually only costs from 30 up to 400 THB (merely a US dollar to around 13 US dollars), depending on the quality of the restaurants

Bangkok Foodies was curious to find out exactly where this popular Khanom Chin dish actually originated from.

Well, according to a famous scholar, Kukrit Pramoj’s article “Soi Suan Phlu” [ซอยสวนพลู] on 22 January 1993 stated that Khanom Chin is actually a Mon food. Mon [มอญ] is a tribe that lives in the area of Southeast Asia called “Suvarnabhumi” or in English means “Land of Gold” where Myanmar, Thailand, Laos, Cambodia and Vietnam locate. 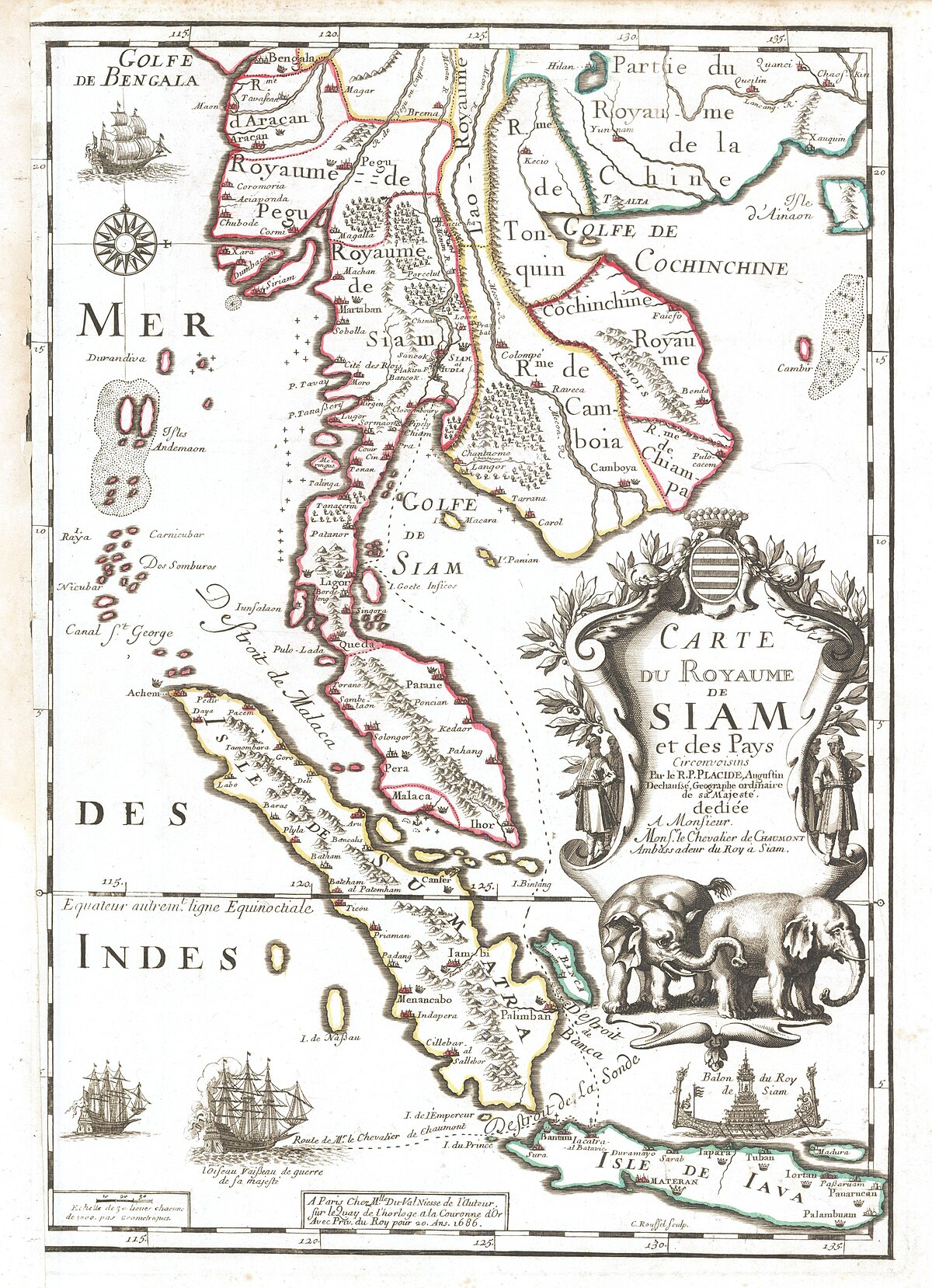 By J. Antonio – The 1904 traveller’s guide to Bangkok and Siam, Public Domain, Link

Khanom [ခၞံ] in Mon is actually a sort of curry that with local anchovy [ปลาร้า: Pla Ra] that Mon people eat with stringy rice noodle, and Chin [စိန်] means cooked. It appears that the real meaning has lost in translation.  We don’t really know when exactly this particular dish was made.

The Scholar says that the noodle travelled with the Mon prisoners of war when the Suvarnabhumi area was full of kingdoms. It appears that this white stringy noodle has merged into other cultures and become part of Suvarnabhumi cuisines.

This noodle can be made fresh or with fermented rice before turning it into alluring strings. Discerning foodies and locals may determine how their Khanom Chin was made through particular odour and the taste. 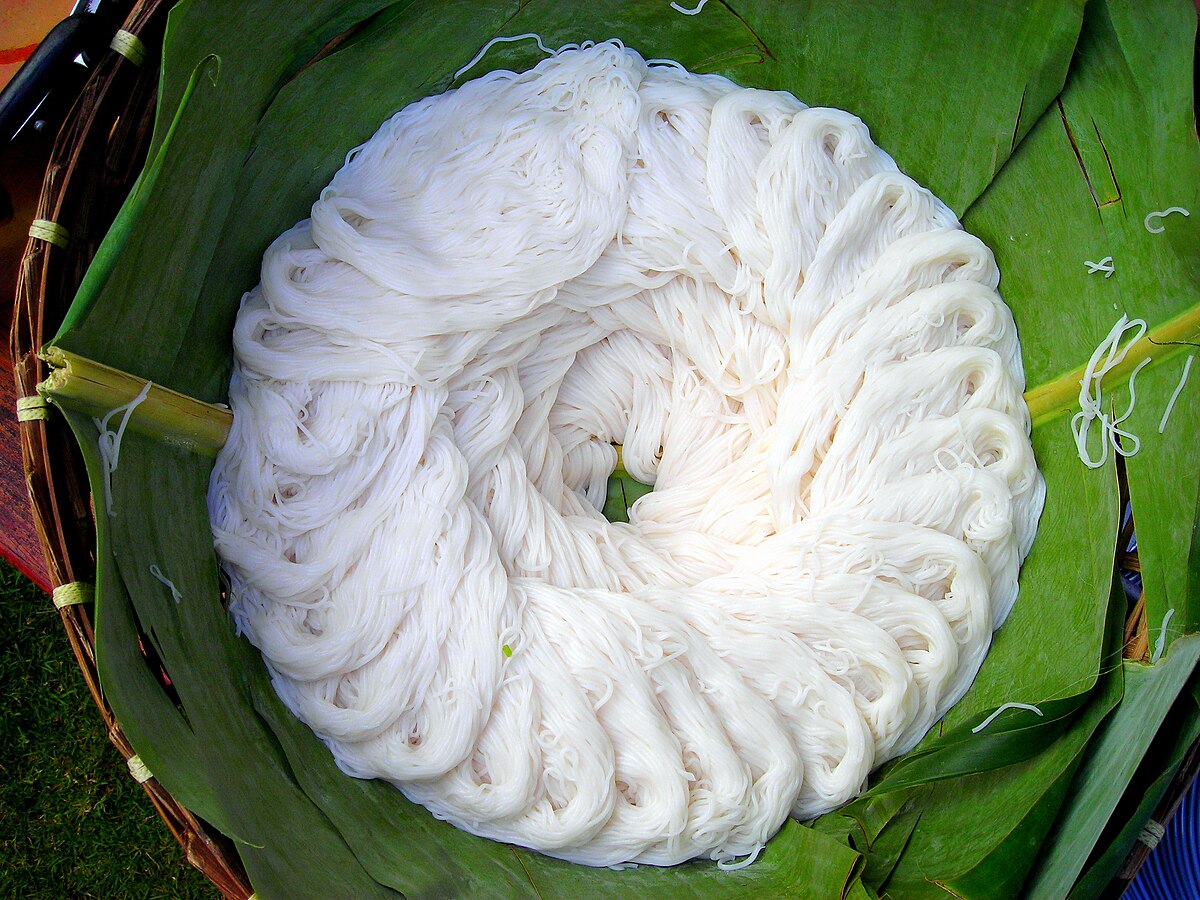 In Vietnam, they call it “Bún” and they have a famous dish called Bún bò Huế, the noodle in a soup with pork or beef. Bún Chả is the noodle eaten with grilled pork belly. 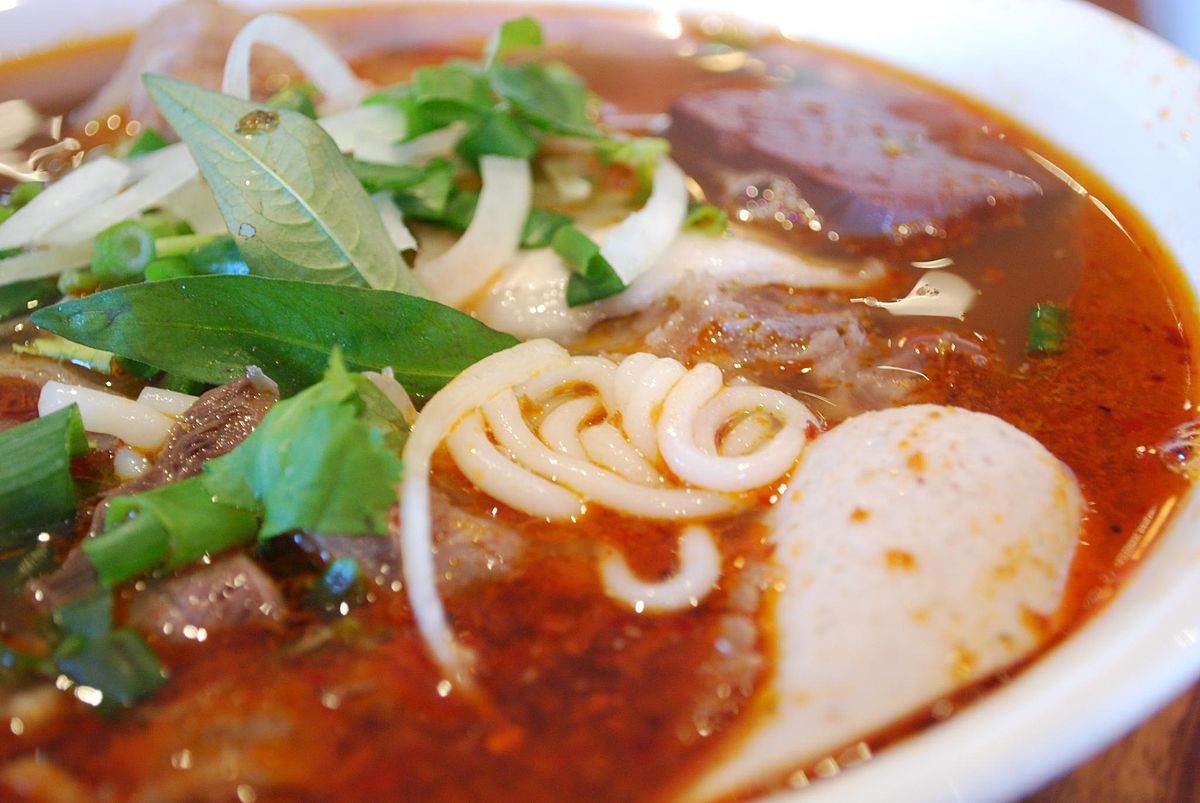 In Myanmar, there is a dish called Mohinga [မုန့်ဟင်းခါး], the noodle in the thick fish soup which is – in fact – their national dish.

Laotians call it “Khao Poon” [ເຂົ້າປຸ້ນ] and top it with Duck Namya or Fish Namya.

We explored some of the most ‘classic’ Khanom Chins, along with some more obscure recipes found in Thailand and also where you may order them to try for yourselves whilst in Bangkok.

Khanom Chin Namya Tai [ขนมจีนน้ำยาใต้] is originally from the Southern part of Thailand. Instead of using ruby red curry, the yellow curry is used here. The South is surrounded by the sea so saltwater fish, shrimp and crab are in the mix.

The most common is fish because it’s affordable. This style is spicy, as Southern-Thai food usually is. However, people of Bangkok can taste this style of Khanom Chin at Ruen Urai which they are even offering for delivery.

Khanom Chin Nam-Ngiao [ขนมจีนน้ำเงี้ยว], a very popular dish in the North of Thailand then later spread to Bangkok and some other parts. It’s a dish originated by Tai Yai, a tribe scattered in Northeast of Myanmar, Southwest of China and, of course, North of Thailand.

This dish is known to be spicy and tangy, and the main ingredients are Bombax Ceiba, known as Dok Ngio [ดอกงิ้ว] in Thai; pork blood cake; chopped tomatoes; chillies; garlic and Tua Nao [ถั่วเน่า], a type of fermented soya bean that is used extensively in northern Thai cuisine. Sometimes they add chicken feet or chunks of beef or pork.

You can preorder authentic Khanom Chin Nam-Ngiao by Luang Poo Toon [หลวงปู่ตุ่น], AKA Kiattikoon “Toon” Auengkum, from Yummee Meeyum [Yummee มียำ]. Toon was a bartender who happens to be unemployed due to COVID-19 but he is a Chiang Rai native so it’s a guarantee that his Khanom Chin Nam-Ngiao is totally legit.

You need to treat the fish correctly as freshwater fish tend to have a muddy taste and smell. The Khanomsen Temsoobspecialises in Khanom Chin, and their Khanom Chin Namya Kati Pla is based on a recipe from Ayutthaya, Thailand’s ancient city.

Khanom Chin Namprik [ขนมจีนน้ำพริก] was invented in Thai royal cuisine. This one is really difficult to create because of its delicate process and is a dish which is slowly dying out. It is required to ground green beans then peanut. Stir-fry shredded coconut until it is golden brown and deep-fry chopped garlic till golden brown then add ground fresh shrimp.

These days, very few people have heard of this style of Khanom Chin. Apart from having many processes, the dish contains an exotic and rare ingredient known as Som Sa [ส้มซ่า], a branch of Citrus × Aurantium, related to Bergamot Orange and Bitter Orange. One of our Bangkok Foodies’ staff, Wariya, learned how to cook this dish when she was a little girl from her beloved late grandmother. It’s sweet and sour with a little bit of bitterness at the end.

These examples are the oldest ways to dine on Khanom Chin but like everything, food has their own evolution.

Nowadays, Thai people put other non-traditional Namya curries on top of white noodles. Some people enjoy eating their Khanom Chin with Green Curry, Massaman Curry or Red Curry but some people mix the Khanom Chin in Som Tum which Thai people call this dish, Tum Sua [ตำซั่ว] or you can replace rice with Khanom Chin.

Although this white stringy noodle is not considered a staple comparative to rice, given its relative difficulty to make, it provides more flavour complexity, which is another reason why it is still seen across Asia’s regions and continues to be loved and appreciated by all generations. 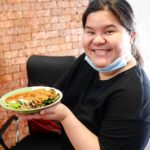